Skip to content
"Whatsoever you do to the least of my brethren, that you do unto me"

The Association helps women to carry out a sustainable trade in food products (selling cassava, palm oil, peanuts, oranges, etc.) in objects (soap, clothing for women and children).
The Beneficiaries are initially only eleven (11) active added of four (4) new recruits.
The microproject managed by this vulnerable layer (women) is going pretty well.

REPORT ON THE ACTIVITIES OF E.S.ca

The ESca Association has set up a project to help women to carry out a sustainable trade in food products (selling cassava, palm oil, peanuts, oranges, etc …) in objects ( soap, clothing for women and children).

The identification of the beneficiaries was carried out in different districts of the city of Bangui like Boy-Rabé, Foûh, Pk12, Ben-zvi, 200 Villas and Pétévo on the basis of honesty, courage and determination. The Recipients of Assistance identified are fifteen (15), only eleven (11) have active and four (4) recruits.

Former and new beneficiaries have been trained in the management of their credit by a Finance Specialist.

One month after obtaining the credit, the first repayment was made in good condition. The fifteen (15) beneficiaries were in good standing.

On Sunday, June 24, 2017, a meeting is organized by the Directorate to contact women who have applied to join the Association. The Director explained to them extensively the merits of the association and the benefit that the ESca intends to bring to them in this microcredit.

Another meeting was held at the home of Mrs. SAMBA Catherine at the 200 Villas on July 08, 2017, during which the Director asked the beneficiaries the situation of their actions:

– Mrs. Samba Catherine has said that it works well. For difficulties, it has the level of poultry feed. At the moment of the crisis the bag which cost 11.000 Frs costs 35.000 Frs which penalizes the good operation.

– Mrs. Youmon Odette, the trade works modestly. Neighborhoods sell almost the same things which makes the flow of products too slow. So the customers are only passers-by those who come from far, because the competition is tough.

– Madame Bafounga Marie Claude, the trade works moderately. She buys pagnes she makes and resells, but the difficulties are at the level of customers who pay late. She wants to find her own store to make models and sell them on the spot.

– Mrs. Dedou-Bouba Lucienne, before it works well. A neighbor has taken the time to do the same business and there is a delay in management. The difficulties are in renting vehicles too expensive for transport. She wants the ESca to find a vehicle to help the beneficiaries.

– Mrs Ouindakoumougna Elisabeth, cassava activities are generally good. The difficulties are during the rainy season and especially wait for the cars for the trip. She wants to go ahead again to make a living and succeed later.

– Mrs. Yapendé-Ko Diane activities are going very well during the school period. When she buys the bag of rice for her business the price increases which penalizes her. The price of the rice bag is fixed, before it is 23,500 francs but now it is 25,000 francs.

– Mrs Maidou Honorine, the trade works well but with a little difficulty. For the loading of the logs one has to pay the loader, to unload also and to the different associated people, which takes a little money. Wish a vehicle for ESca to help us. 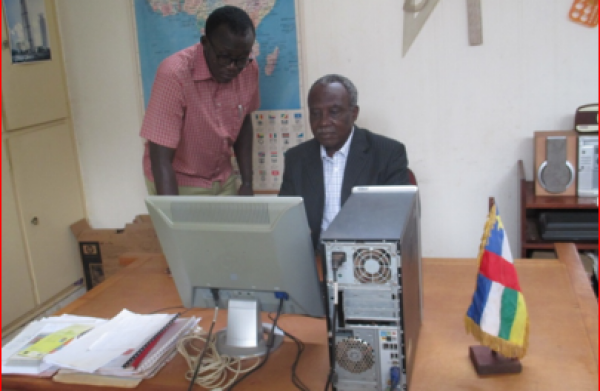