"Whatsoever you do to the least of my brethren, that you do unto me"

At Loyola Catholic Secondary School, Chaplaincy leader Teresa McFadden organized staff and student awareness opportunities. The school was blessed to have a visit from His Excellency Bishop Kussala from South Sudan arriving with Fr. Stan to give a talk to our Grade 11 students in our school library, hosted by EkwyOdozor, school Librarian and Treasurer of CSA. Before the talk, Bishop Kussala and Fr. Stan enjoyed their first experience of High Tea, prepared by our Hospitality class of students who posed for a picture with our gratefully appreciative visitors. The Bishop and Fr. Stan loved their first tastes of scones and strawberry jam!! To close their stay at Loyola, Bishop Kussala and Fr. Stan spoke to our Grade 9 students at the start of a Link Crew event, where Loyola senior student mentors, or Link Leaders, organized events for the Grade 9 students who are new to Loyola. At both talks, Bishop Kussala spoke about the challenges in South Sudan in creating an independent country and building infrastructures like schools accessible to all students. Fr. Stan encouraged the Loyola students to be Canadian Samaritans for their brothers and sisters in Africa. Inspired by their talk, and with the help of Marlene Matyszczuk,the Link Leaders created a backdrop of the African continent and each Grade 9 student was invited to write their name on a paper dove that was taped to the continent of Africa, a stunning visual that shows our spiritual connection to our wider family in Christ with the African continent. Bishop Kussala left our school hoping someday to build a similar school in South Sudan with programs and hands-on classes like Hospitality. The Bishop arrived and left with hope. 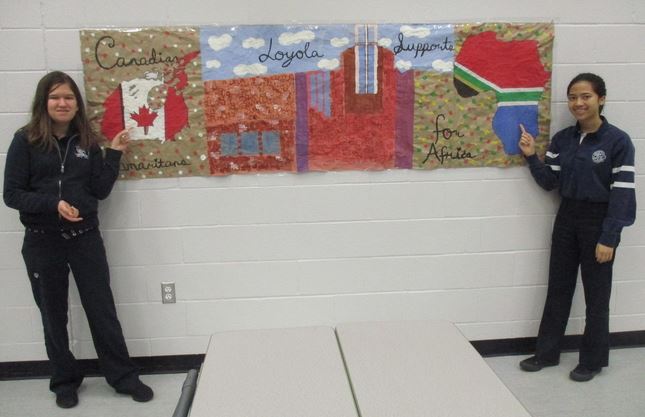 Other activities at Loyola included a bake sale organized by the school’s HOPE club, Helping other People Everywhere, with proceeds going to CSA. Another student club, DECA, which develops business skills, also contributed to the bake sale. In total, $150 was raised in sales.

At other times in the year, morning prayers led by Teresa, Loyola’s Chaplaincy Leader, focused on the success stories of the CSA. Under the topic of charitable giving and making the most impact with donations, the school heard how Fr. Stan personally brings donations to the people in need. As well, our school donations were given to Triple C if CSA to help people like Anne Owyno. She is a 50-year-old widow and mother of 5 children, and also lives with HIV. Two of her children were born with sickle cell disease and Anne is also caring for her mother-in-law who suffered a stroke. Through donations, Anne has received counselling, training and attends workshops which have empowered her to run a small business of making her own detergent and selling soap. She also leads meetings to help prevent the spread of HIV and to stop the discrimination against those infected with the disease. Anne sends this message to donors: “long live Canadian Samaritans for Africa – God bless you all.”

Here is another awareness story Loyola heard. Harriet Bora is 49 years old and married with 3 children. She lives in a very poor area of Kenya and sells what she farms on her small plot of land. She sees hope with Loyola’s help. She said: “a thousand miles starts with 1 step. With a loan, I have a photocopier and my business is growing. I now see light at the end of the tunnel. With a new load, I will buy more material for sewing school uniforms to sell. My shop will be full of items customers want.” Harriet expects to repay her loan and continue to build her business to support her family. Help through Triple C of the CSA is essential in a country with no unemployment insurance or welfare programs like we enjoy in Canada. We are helping hard working people who want to repay what they have been given. These are not handouts but truly hand ups. As a visual, the students in Loyola’s HOPE club (Helping Other People Everywhere, supervised by Teresa) made a beautiful poster linking the continent of Africa with the Loyola school building. This poster was displayed in the school cafeteria. With these real messages from Anne and Harriet along with the poster, the Loyola community rallied behind a civvies day fundraiser, paying for the privilege to wear casual clothes instead of their usual school uniform with proceeds going towards helping women like Anne. This Civvies Day raised $2,450 for CSA. 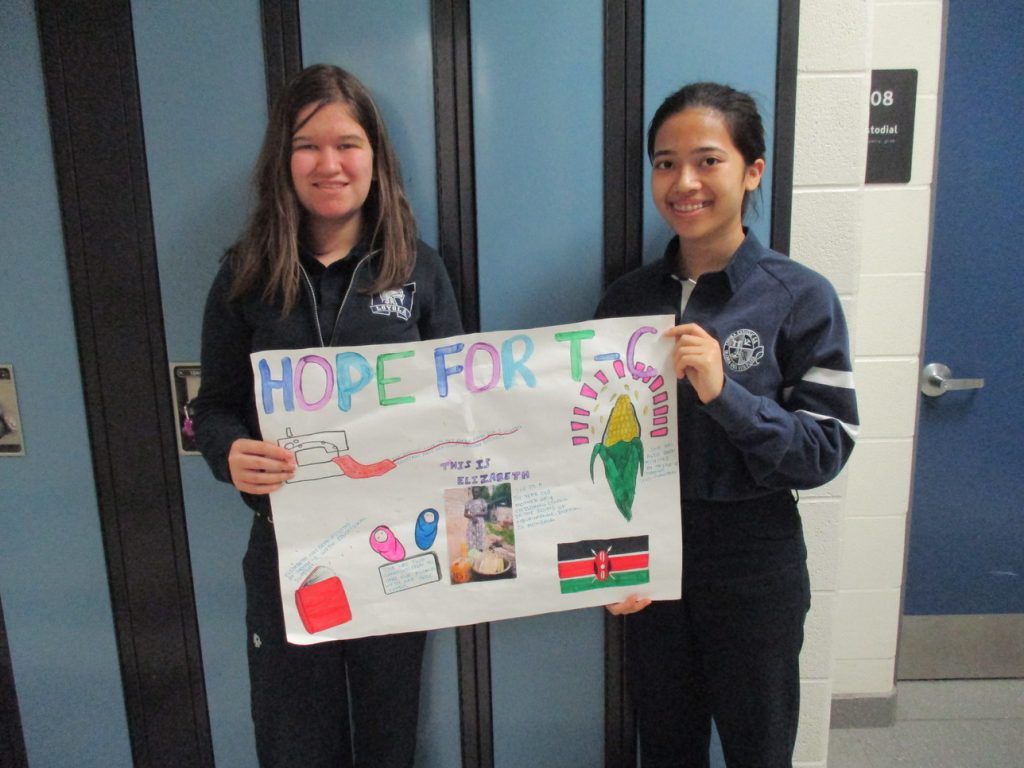 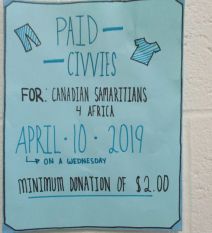